For simultaneous 5-axis CNC programming, you can’t use conversational programming. You will need to use NC and purchase a CAM system. However, the features of your machine’s control are important to consider.

Tool Path Linearization eliminates gouging of the workpiece and the line segments in the form of XYZBC or AC moves that a CAM system uses to create a smooth part.

How it works The tooltip and tool vector are interpolated between tool positions with respect to the workpiece, even with the tool and part rotating inside the machine. The tooltip basically attaches itself to the workpiece instead of blindly following the rotations commanded.

Tool Vector Input allows the control to compute machine angles and positions, and calculates the angle the tool is going to tilt from the contact point of the surface. Tool Vector Input makes the part program machine-independent, which means you can use the same part program on machines with different axis configurations.

How it works CAM systems generally use tool vectors to generate the tool path internally. With Tool Vector Input the machine accepts the vector code so the CAM system doesn’t have to filter the code through a post-processor. The control lets you specify the tooltip location relative to the workpiece and the tool axis vector instead of using address letters to specify the A, B and/or C axes angles. The control’s software automatically compensates for the position of the tool in part coordinates that are relative to the centerlines of rotation for the B and C axes. Therefore, the control understands where the workpiece is located relative to the centerlines of rotation of the rotary axis.

Tool Vector Retract tells the spindle to retract along the tool vector angle. 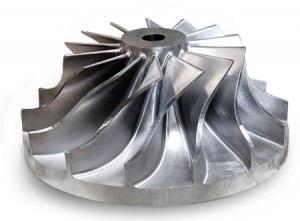